(Greater Sudbury) On November 29th and 30th, the Greater Sudbury Chamber of Commerce was one of four chambers from across Northern Ontario that made a trip to Queen’s Park for two days of advocacy and discussions with provincial leaders on the challenges faced by Northern Ontario businesses and the many opportunities and advantages that those same businesses have to offer.

Joining the Greater Sudbury Chamber of Commerce were the chambers from Sault Ste. Marie, and Timmins as well as representatives from the Sault’s Innovation Centre, the Sault Ste. Marie Economic Development Corporation, the Port of Algoma, Glencore’s Kidd Operations and the Centre for Excellence in Mining Innovation (CEMI).  Representatives from the Thunder Bay and North Bay chambers were not able to attend due to other conflicts.

“There are cross-cutting business issues across our northern region that impact us differently than Southern Ontario,” said Tracy Nutt, Chair of the Board, Greater Sudbury Chamber of Commerce, and one of the mission participants.  “We were at Queen’s Park as a collective Northern Ontario business voice to relay what it means to do business in the north and to represent our joint recommendations on issues that impact us adversely: issues  like energy prices, the cost of doing business, cap and trade and transportation costs,” added Nutt.

The Queen’s Park mission included meetings and discussions with:

The event also included a Northern Ontario reception where the northern chambers invited Ministers, opposition leaders, critics, MPPs and government staff to attend.  The reception provided the opportunity to meet in a more relaxed and informal setting.

This was the first ever Northern Ontario Chambers’ delegation to Queen’s Park.  The northern chambers would like to make this an annual event moving forward.  The two days of advocacy at Queen’s Park was meant to lobby for Northern Ontario specific business issues but was also used to advance the unique opportunities that exist in the north to help develop economic prosperity in Ontario. 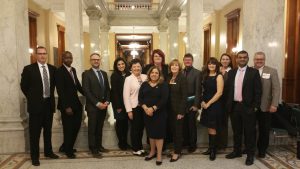 Photo caption: The Northern Chambers’ delegation with Cristina Martins, Parliamentary Assistant to the Minister of Economic Development and Growth

Event photos can be found here.